Hey Girl Gang! Only 2 more Force Fridays after this until The Force Awakens is released!

Today we are going to discuss racial representation in The Force Awakens and beyond.

Popular media influences society in many ways. The most important way might be how it defines societal standards. The images that are pervasive in our popular media are what become our society’s “normal”. We see the same kinds of images so often that we consider them the norm without realizing it. This is often discussed when people speak out against the media’s beauty standards, which is commonly seen on social media. What is discussed less frequently is the way that popular media promotes and maintains white supremacy. White people have dominated television and film for such a long period of time that they have falsely become the standard. People don’t even notice when they see an all-white cast, yet they always notice- and even protest- when seeing people of color on their screens. People are so used to white supremacy of the media that they consider any person of color on their screens ‘abnormal’.

This is an appropriate topic for today after last night’s broadcast of The Wiz. There was racist backlash to the all-black cast on Twitter, which was quickly responded to by many who pointed out that the original movie The Wizard of Oz featured an all-white cast. (Not to mention, you know, the complete whiteness of almost EVERY MOVIE EVER MADE UP TO MODERN DAY.)

That same kind of racist backlash occurred over the first The Force Awakens trailer. (Warning: eye-rolls and loss of faith in humanity ahead.)

A hashtag was created in protest of the movie, just because there weren’t enough white people. I’m not even kidding. Some people tried to pretend their blatant racism was logical by saying that Stormtroopers are clones of a white guy. Hopefully I don’t have to explain why this is so stupid. Star Wars is fiction and only racist dudes will accept a freaking sword made out of laser as totally okay but then insist that a black person is ‘unrealistic’ in a FICTION WORLD. Also, for all you non-Star Wars people, it has been canonically confirmed that Stormtroopers are NOT clones, so they can be female and/or people of color.

Actor John Boyega’s reaction to the backlash couldn’t have been more perfect. He simply said, “I’m in the movie, what are you going to do about it? You either enjoy it or you don’t. I’m not saying get used to the future, but what is already happening. People of color and women are increasingly being shown on-screen. For things to be whitewashed just doesn’t make sense.”

And he’s totally right. Which brings us back to my main point: representation is important. The main three characters of The Force Awakens – Finn, Poe, and Rey – are black, Guatemalan-American, and female respectively.  This is really progressive for both Hollywood and for the Star Wars franchise. It is important that Star Wars didn’t fall back on their typical white male lead prototype for their protagonists. People of color will see themselves represented in the biggest motion picture event of the year. 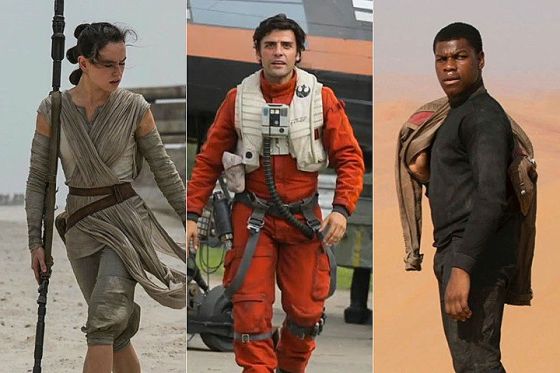 I talk a lot about why female representation is important in comics and movies, but when it comes down to it, I’m a white person. I see myself in comics and film constantly. Even if I don’t like how the white woman is represented, I still see her there all the time. People of color rarely see themselves at all.

Although we have two men of color as leads, as usual women of color aren’t truly represented – Lupita Nyong’o is in the film, but only her voice and some of her face through motion capture animation. She plays an alien.

Still, as I often talk about, we need to celebrate progress when we see it, even if it isn’t as progressive as it needs to be. The merchandise of The Force Awakens has Finn and Poe front and center. A young black boy who adores Star Wars but has seen almost all white people in the films can own a Finn action figure who looks like him. A Guatemalan-American boy can see himself on the screen and be Poe next Halloween. They will see themselves represented on the screen. They will not see yet another white male lead as ‘normal’.

Representation is so important. The biggest film franchise in the world has three minorities as its leads. And let’s be real: The Force Awakens will inevitably make an unbelievable amount of money. Other film studios will see this and maybe stop believing the bullshit about women and people of color not seeing movies. We need to change our definition of the white male as the norm on which all else is based. Every child should see themselves as normal.